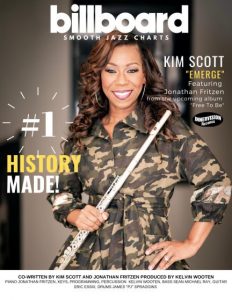 Kimberly Strickland, aka Kim Scott in the Jazz World, is a terrific flutist and is making great strides in the smooth jazz category. She graduated with her Bachelor of Music at the University of Alabama. Strickland is an active classical and jazz performer, teacher, and is currently the Director of Student Support Services at Alabama School of Fine Arts.

“Innervision Records recording artist Kim Scott released her debut album of jazz music for flute in 2011 entitled “Crossing Over”, which received high acclaim. She has since become well-known for her exceptional tone, intoxicating melodies, and flawless technique. Kim Scott released her sophomore CD, “Rite of Passage” in May of 2013. The debut single, “Golden” and the follow-up single “Block Party”, were the #1 most played and most added songs the day of their national release. “Rite of Passage” was in the top 15 on all the national smooth jazz charts including the Billboards, Radiowave and Smoothjazz.com. In 2016, she was signed to Innervision Records Label and released the single “Sizzle”, written by her and trumpeter Lin Rountree, which made its way to the top 20 on the national smooth jazz charts. September 2016 saw the release of “Southern Heat”, Kim’s 3rd album and her debut album on the Innervision label that took the world by storm.

Kim’s latest single, “Emerge”, was co-written by herself and pianist Jonathan Fritzen and is the lead single from her upcoming 4th album “Free to Be”. The single hit #1 on the Billboard and Groove charts in just 10 weeks and is still charting to date. “Free to Be” was released July 19, 2019. In addition to being a national recording artist, she is the host of “Block Party Radio Show”, which airs on jazz radio stations across the globe and is now nationally/internationally syndicated across the United States and Australia. Kim Scott has performed on the stages of Blues Alley, Seabreeze Jazz Festival, Greater Hartford Festival of Jazz, Catalina Jazz Traxx and more as a soloist. She is also a member of the all-female jazz supergroup Jazz in Pink, alongside other musicians such as keyboardist Gail Jhonson and violinist Karen Briggs, and has shared the stage with them across the country.