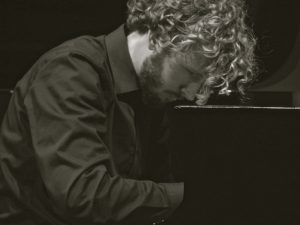 Edward Forstman explores contemporary music as a solo pianist and collaborator. For this solo show in Tuscaloosa, Forstman is presenting solo piano music of the Birmingham Art Music Alliance (BAMA), which has for almost 25 years provided a platform for the exploration of the musical avant garde in the Deep South. He is presenting their music alongside Zosha Di Castri’s “DUX,” a violent portrait of the political tensions during the 2016 election, as a reflection on the resistance of the arts to the wider culture and his most recent memories of living in Alabama in 2017.

Active in contemporary opera, he performed for dell’Arte Opera Ensemble on the premiere of Whitney George’s opera Princess Maleine, and worked with conductor Harold Rosenbaum and the New York Virtuoso Singers to bring Andrea Clearfield’s opera “Mila, Great Sorcerer” to the stage of Beth Morrison’s Prototype Festival. Forstman also participated in the Birmingham Art Music Alliance’s presentation with the Alabama Symphony Orchestra, where he premiered Holland Hopson’s “Slow Light from the Farthest Star.” Currently, he is working with the Manhattan School of Music’s Contemporary Opera Ensemble on a workshop of Julian Wachner’s opera “Revelation 23.”

About the BAMA works: Monroe Golden’s “81” uses a series of nine partials (the last being the 81st) as material for 9 linked episodes of 9 bars each, fancifully relating back to the original series. “Starscapes” by Mark Lackey is a grandly neo-Romantic fantasy. Michael Coleman’s “Chaconne” is inspired by the style of incidental music, creating a glassy surface over a repeating harmonic progression. William Price’s “Petite Scherzo” combines virtuosity with humor in a twisted two-part invention. “Incongruity” by Monroe Golden augments the equal temperament of the piano with a fixed-media track in extended just intonation for a concertino together that percolates towards its conclusion. “Slow Light from the Farthest Star” is a beautiful exploration of a chord progression via MaxMSP.

More information about this year’s festival is at http://fest.artmusic.org.This event is co-sponsored by the Birmingham Art Music Alliance and New College. The 2019 Birmingham New Music Festival is made possible in part by grants from the Alabama State Council on the Arts and the National Endowment for the Arts.