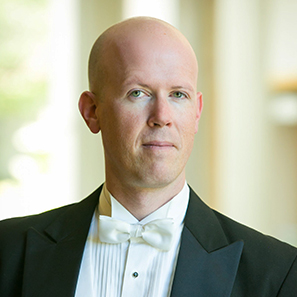 Caleb Harris joined the School of Music faculty in the fall of 2020 as Instructor of Music and Vocal Coach in the opera and voice programs. He enjoys an active career as a conductor, pianist and chamber musician and is equally at home at the keyboard and on the podium. Harris has appeared throughout the United States, Austria, Germany, France, Italy, Scotland, Slovenia, and Asia at many prestigious venues including Carnegie Hall, Seiji Ozawa Hall at Tanglewood, and the National Concert Hall in Taipei, Taiwan.

In the summer of 2019, Harris made his conducting debut at Opera in the Ozarks at Inspiration Point with Adamo’s Little Women with Robert Swedburg directing. In March of 2018, Harris made his debut with the Eklund Opera Program at the University of Colorado at Boulder with Sondheim’s Sweeney Todd with Leigh Holman directing. In the summer of 2017, Harris conducted Donizetti’s Don Pasquale at the Brevard Music Center with David Gately directing. In 2017, he also made his debut with the Southwest Michigan Symphony Orchestra in their Sounds of the Season Concert with chorus and orchestra.

Currently Harris is also Adjunct Associate Professor at Vanderbilt University’s Blair School of Music. Harris formerly held positions at the University of Northern Colorado, the University of Utah and Utah Symphony/Utah Opera. His students have won many competitions and awards, including the MTNA state finals, the Colorado Symphony Concerto Competition and the Denver Philharmonic Competition.

Dr. Harris hold the B.M from Oklahoma Baptist University, and the M.M., Performer’s Certificate, and D.M.A. from the Eastman School of Music. He has recorded professionally in a wide variety of genres for Summit Records, Navona Records, Potenza Music, and Acis Productions. He received multiple degrees from the Eastman School of Music and also held fellowships at the Tanglewood Music Center.