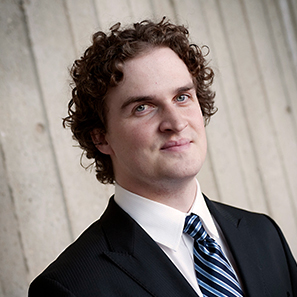 Jamie Reeves joined The University of Alabama faculty in the fall of 2020 as Director of Orchestral Studies and Instructor of Music. Jamie conducts the Huxford Symphony Orchestra and teaches Undergraduate and Graduate Conducting, and Honors Intro to Listening.

In recent seasons, Jamie has been a frequent participant in international conducting masterclasses and competitions where he has conducted orchestras including the Baltimore Symphony Orchestra, the Cabrillo Festival Orchestra, Festival Strings Lucerne, Filharmonia Śląska, the Fort Worth Symphony Orchestra, L’Orchestre Victor Hugo Franche-Comté, and the Richmond Symphony. As an enthusiastic advocate for New Music, Jamie is a frequent collaborator with composers of our time, conducting premier performances of Camila Agosto, Maxime Daignault, Patrick Thompson, and Hangrui Zhang among others. Jamie has also been recognized through numerous awards and scholarships, including the Peabody Career Development Grant and the Thelma A. Robinson Award given by the Conductors Guild and the National Federation of Music Clubs. Strongly committed to inspiring the next generation of orchestral musicians, Jamie is a guest clinician for youth orchestras throughout the United States including the Baltimore Symphony Youth Orchestra, the Chesapeake Youth Symphony Orchestras, the Southern Maryland Youth Orchestra, and the Stamford Young Artists Philharmonic.

An Alabama native, Jamie completed his Bachelor of Music Degree at The University of Alabama in 2009 studying trombone with Dan Drill and Jay Evans, and conducting with John Ratledge.During this time, Jamie performed with many orchestras in the region including the Alabama Symphony Orchestra and the Tuscaloosa Symphony Orchestra. Jamie continued his studies at Indiana University’s Jacobs School of Music, earning his Master of Music degree in Orchestral Conducting in 2011. In May of 2020, Jamie completed his Doctor of Musical Arts degree in Conducting at the Johns Hopkins University Peabody Conservatory. Jamie studied conducting primarily with Marin Alsop, David Effron, Arthur Fagen, John Ratledge, and Joseph Young, and in masterclasses with JoAnn Falletta, Bernard Haitink, Cristain Măcelaru, Leonard Slatkin, and Markus Stenz.