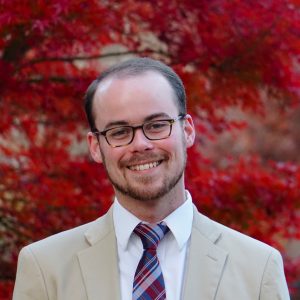 John Robertson joins the School of Music faculty in the fall of 2021 as Instructor of Music, Opera Conductor, and Vocal Coach in the voice and opera areas.  An experienced conductor and music director, he holds undergraduate and graduate degrees in Piano Performance and Pedagogy, and he is currently pursuing a DMA in Piano Accompanying and Chamber Music at the Eastman School of Music, studying with Dr. Jean Barr, Dr. Andrew Harley, and Dr. Russell Miller. In 2019, he was the recipient of the Barbara M. H. Koeng Award for Excellence in Vocal Accompanying, and in January 2020, he was invited to participate in Renée Fleming’s SongStudio at the Weill Music Institute at Carnegie Hall. Since 2020, he has been invited to serve as a repetiteur for the American Institute of Musical Studies (AIMS) in Graz, Austria. John has frequently performed in Opera Birmingham’s Sounds of the Season and Home for the Holidays recitals, the annual Opera Birmingham Vocal Competition, Opera Shots, and Art of the Rocks at the Birmingham Museum of Art. In January 2017, he performed with pianist Laurie Middaugh in a special two-piano accompaniment for Opera Birmingham’s production of Three Decembers, and he returned the following season to perform in The Tragedy of Carmen. He has performed in the orchestra for Samford University’s production of Irving Berlin’s White Christmas and Red Mountain Theater Company’s productions of Fiddler on the Roof, Newsies, Beauty and the Beast, and Mamma Mia! John has served as chorusmaster and vocal coach for many operatic and musical theater productions, including The Desert Song, Die Fledermaus, and Naughty Marietta with Birmingham Music Club, and The Pirates of Penzance, Amahl and the Night Visitors, On the Town, The Marriage of Figaro, Hansel and Gretel, and numerous opera workshop performances with Samford Opera. Active also as a music director, he has conducted Samford University’s recent productions of Bat Boy: The Musical, Nice Work if You Can Get It, and Children of Eden, and Opera Birmingham’s recent production of The Pirates of Penzance. John has given recitals throughout the United States and has also worked as a staff accompanist at the Alabama School of Fine Arts, Bob Jones University, Birmingham-Southern College, Eastman School of Music, Samford University, the University of Alabama at Birmingham, and the Vann Vocal Institute, accompanying faculty in recitals and undergraduate and graduate students in recitals, auditions, and competitions. For three years, John served as Lecturer and Collaborative Pianist at Samford University in Birmingham, Alabama, teaching applied piano and courses in accompanying, chamber music, and musical theater. He previously served as a member of the music faculty of Judson College in Marion, Alabama, teaching applied piano and group piano, and courses in music theory and piano pedagogy