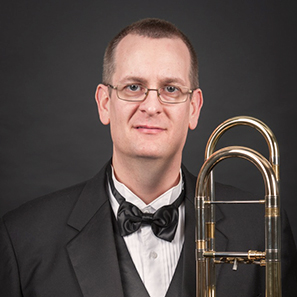 As a soloist, Whitaker can be heard on numerous recordings including the 2013 release of his debut solo recording entitled “Nature’s Gift” with pianist Kevin Chance. He is a featured soloist on two recordings with the University of Alabama Wind Ensemble that include Anthony Barfield’s “Red Sky” and David Maslanka’s Concerto for Trombone and Wind Ensemble. These recordings are available at www.jonathanwhitaker.com.

Whitaker has been very active in commissioning new works for the trombone. In 2016 he gave the world premiere of Nicola Ferro’s Mega for solo trombone and wind ensemble. In 2013, Whitaker gave the world premiere of Jim Stephenson’s Three Bones Concerto commissioned for the University of Alabama Wind Ensemble along with Joseph Alessi and Peter Ellefson. He also performed the work at the 2013 Eastern Trombone Workshop with the United States Army Band “The Pershing’s Own”, again with Alessi and Ellefson. He is also responsible for the commissioning of Eric Ewazen’s Visions of Light.

As a chamber musician, Whitaker can be heard on Dee Stewart’s CD entitled D+ (Dee Plus) performing with the Indiana University Trombone Faculty and on two recordings by the Stentorian Consort Trombone Quartet.