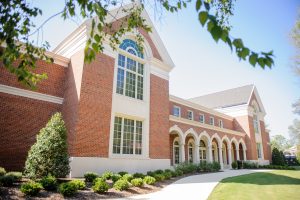 The School of Music occupies the Frank Moody Music Building, which provides a spacious and beautiful environment in which to study and perform. The centerpiece of the building is the 1,000-seat concert hall with its Holtkamp organ, standing three stories high with four manuals, 65 stops, and more than 5,000 pipes. The building, which has 135,000 square feet of floor space, includes a recital/lecture hall; choral/opera and jazz rehearsal rooms; pipe-organ practice rooms; large teaching studios; 52 practice rooms; a media center; research labs for music education and therapy; and studios equipped for electronic and computer music. Additionally, Moody Music Building holds three instrumental rehearsal spaces, one of which is large enough to hold the entirety of the world-renowned Million Dollar Band. The Moody Music Building is located at the east end of the University of Alabama campus and has ample parking directly across the street. The flowers, trees, and benches in the building’s large courtyard complete the picture of a modern facility in a graceful setting.

Firms involved in the design of the building include

The Concert Hall is the centerpiece of the Moody Music Building. Its dimensions are the same, proportionally, as those of the famous Grosse Saal in Vienna’s Musikverein. Its acoustics have been widely acclaimed, and it has been used for several commercial recordings.

With two balconies, the Concert Hall seats almost 1000. The front lip of the stage may be removed to expose an orchestra pit used for ballet and opera productions. Since it was designed from the start as a pure concert hall, there is no fly space or proscenium. Austrian curtains adorn the entire lengths of the side walls and may be raised or lowed to alter the acoustics. Above the stage there is a bank of plexiglass clouds that affect the distribution of sound in the room. Motors for the clouds and the curtains are controlled by a panel backstage.

The Concert Hall was inaugurated in December 1987 with a concert by Marilyn Horne and the Alabama Symphony Orchestra.

The organ in the Concert Hall of the Frank Moody Music Building was created by the Holtkamp Organ Company of Cleveland, Ohio, at the instigation of Warren Hutton, then professor of music and university organist. The instrument was funded entirely by private donors.

There are sixty-five and one-half independent stops and eighty-six ranks of pipes. There are some five thousand pipes in the instrument. The key action is mechanical (tracker action), and the stop action is electric. There is mechanical intermanual coupling, but there is also additional, electrical coupling for Swell to Great, Positiv to Great, and Swell to Positiv. These three special couplers are designated with an “E,” so there is a “Swell to Great E” coupler as well as the usual “Swell to Great” coupler.

Walter Holtkamp, the builder, described the physical organization as follows: “The Solo, an enclosed division, is located directly above the console. Above the Solo is the Great and at the top of the central section we placed the Swell. Flanking the Great and Solo is the Pedal. Above the Pedal, on each side, is the Positiv.”

The instrument was installed in 1988 and featured in that year’s September issue of The American Organist.

The Recital Hall seats 140 persons and is used for student recitals, lectures, large classes, and special events. A seven-foot grand piano is kept on the stage. Above the stage are the pipes of a Schlicker organ. The organ console is kept backstage when it is not in use. Motorized blinds on the side walls may be raised or lowered to alter the reverberation.

The Choral Rehearsal Room is used by the School of Music choral ensembles. It is also used as a large classroom/lecture space, and an area for post-concert receptions.

The Instrumental Rehearsal Room is used by the Huxford Symphony Orchestra as well as the Tuscaloosa Youth Orchestra. The large crescent windows provide an excellent view of Butler Field, the Million Dollar Band’s state of the art rehearsal field.