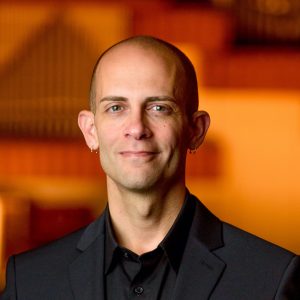 Amir Zaheri (they/them/their) is an American composer, conductor, performer, and educator with Persian and Appalachian backgrounds. Amir’s art is concerned with issues of social justice and the experiences of those who have been Othered, and likewise expresses Amir’s own multicultural origins and queer identity. In a career spanning more than two decades, Amir has worked in professional, faith-based, and academic settings.

Amir’s compositions reveal a multifaceted and eclectic use of media, from works for the concert hall and operatic stage to those for electronics, ﬁlm, dance, and all forms of theatre. Commissioners of Amir’s sonic art include such varied entities as the United States Army Field Band, the Huntsville Symphony Orchestra, the School Social Work Association of America, and the Kentucky Music Educators Association. In demand as a conductor, especially with all-state and festival choirs, Amir has led performances with orchestras, new music ensembles, and a wide variety of choral groups. An accomplished organist, pianist, and vocalist, Amir has performed as a member of the world-renowned Atlanta Symphony Orchestra Chorus and on several solo recital tours. Amir also spent nearly two decades working in the worship arts, notably as a member of the acclaimed music ministry at Atlanta’s Peachtree Road United Methodist Church as Chapel Organist, Choirmaster, and Composer-in-Residence. In 2007, during Amir’s tenure, USA Today cited Peachtree Road UMC as one of the “10 great places to hear heavenly music” in the United States.
An active collaborator, Amir frequently works with the choreographer and ﬁlmmaker Rebecca Salzer: the duo explore issues as diverse as the possibilities of online performance spaces and the humanitarian toll of the refugee crisis in Greece as witnessed ﬁrsthand by the two collaborators in 2016. These ﬁlms and others scored by Amir have been screened at such prestigious events as the Edinburgh Fringe Festival, in Scotland; the International Experimental Film Forum, in Los Angeles; the Contact Dance International Film Festival, in Toronto, Canada; and at the Dansmuseet in Stockholm, Sweden.

Amir currently serves as Associate Director of the School of Music at The University of Alabama, where they are also engaged as Associate Professor and Head of Music Composition, Director of Choirs, Artistic Director of the Contemporary Music Ensemble, Conductor of the Tuscaloosa Youth Orchestra, University Organist, and University Carillonneur. As an administrator, Amir is in tune with student wellbeing and curricular matters as Director of Undergraduate Studies, Student Affairs, and Student Wellness.

Forthcoming creative projects include a concert at Carnegie Hall in June 2022, where Amir will conduct the world premiere of their piece After a Season of Silence, the second piece they have premiered at the fabled venue.