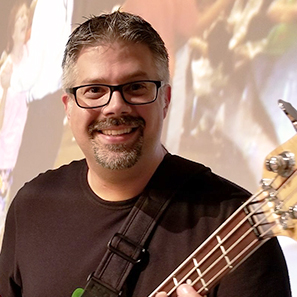 Christopher Kozak is associate professor and director of jazz studies at The University of Alabama. He holds both an MM in jazz arranging and composition and a BM in African-American jazz studies in double bass performance from the University of Massachusetts in Amherst, MA.

While at UMASS he has studied Jazz Composing and Arranging with Jeff Holmes and double bass with renowned Double Bassist and composer Salvatore Macchia. He also studied advanced Improvisation Techniques with saxophonist Chris Merz and multi-reeds artist Adam Kolker.  Professor Kozak was also a composition student of Yusef Lateef and his methods of Autophysiopsyhic Music.

He was a Downbeat Jazz Award recipient in 2000, 2001, and 2002 with the UMASS Studio Orchestra on double bass. He is a former faculty member of Springfield College, Holyoke Community College, and is a current member of the CMENC, ABA, AMEA, and Jazz Education Network. He also remains active as a clinician and high school jazz festival adjudicator at the regional, national, and international levels.

One of his notable previous accomplishments was in Colombia South America with the Cultural Exchange Centro Colombo Americano for a jazz camp that he and Dr. Jonathan Noffsinger  developed and taught. They spent time in Medellin Colombia working with students at the EAFIT University and the RED Banderas (young children) within the city for a week. The following week they were in Manizales, Colombia for another jazz camp for their students at the University Nationale. Several performances were lined up with his quartet at the Moravia Center and San Fernando Plaza in Medellin and the National University and University of Caldas in Manizales.

As the current director of the University of Alabama Jazz Ensemble, he has taken the Ensemble to various Festivals such as the UGA/Athens Twilight Jazz Festival, Notre Dame Jazz Competition, and to the 1st Annual Jazz Education Network Conference in St. Louis, MO.

Professor Kozak has been on faculty at The University of Alabama since 2005.