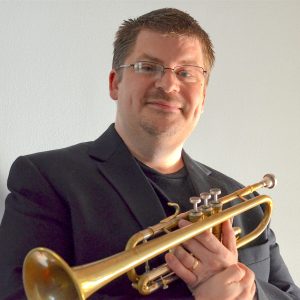 In addition to serving as the trumpet professor at The University of Alabama School of Music, Eric Yates is principal trumpet of the Tuscaloosa Symphony Orchestra, first trumpet of the Alabama Brass Quintet, and a founding member of the internationally touring Fortress Brass. Yates is an in-demand soloist and clinician and has appeared throughout the United States and the world as a soloist, ensemble member, and teacher. He has performed in England, France, Belgium, the Netherlands, Italy, Cuba, the Republic of Georgia, and numerous times in Russia where he has presented master classes and recitals at the St. Petersburg and Moscow Conservatories seven times since 2009. He has also appeared at the Instituto Superior de Arte (ISA) in Havana Cuba, the American University of Rome Italy, the Tbilisi State Conservatory in Georgia, and at numerous institutions in the U.S., including Emory University, Furman University, the University of Georgia, Mississippi State University, Western Carolina University, Northwestern University, and many others.
He has hosted the Trumpet Festival of the Southeast regional trumpet conference at The University of Alabama three times and serves on its board of directors, and he has judged several years at the National Trumpet Competition in addition to adjudicating the U.S. Open Brass Band Competition and at the North American Brass Band Association (NABBA) championships. He was awarded the Best Cornet Player of the 2006 U.S. Open Brass Band Championships in Chicago IL, toured with the award-winning Fountain City Brass Band of Kansas City MO, and served two years as principal solo cornet of the Prairie Brass Band of Arlington Heights IL.
Before his appointment at The University of Alabama in 2007, Dr. Yates was an active performer in the Chicago area as principal trumpet of the Northbrook Symphony, co-principal trumpet of the Chicago Brass Choir, and a faculty member of the Lake Forest College Department of Music and Wright City College Department of Fine Arts in Chicago. His performance career has included engagements with numerous professional orchestras in the United States, including the Huntsville Symphony Orchestra, the South Bend Symphony, the Illinois Symphony, the Elmhurst Symphony, the Northwest Indiana Symphony, and the Nashville Symphony, and he performs regularly with the Alabama (Birmingham) Symphony Orchestra. Dr. Yates’ performance skills and experience encompass all aspects of classical trumpet and cornet playing from modern symphonic, chamber, and solo work to authentic period performance on historic natural trumpets. He earned his Doctor of Music degree in trumpet performance from Northwestern University, and his principal teachers include Charles Geyer, Barbara Butler, Vincent Cichowicz, and Gary Armstrong.