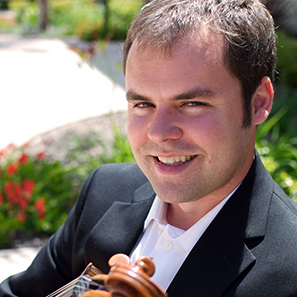 Lauded for his “engaging” performances and his “expressive and intense” playing (American Record Guide), Jacob Adams is Associate Professor of Viola at the University of Alabama. Since making his solo debut with the Cincinnati Symphony Orchestra at age 17, he has performed throughout the United States and at major venues around the world, including all three stages at Carnegie Hall, Merkin Hall, the Hollywood Bowl, Boston’s Symphony Hall, Seattle’s Benaroya Hall, the Rudolfinium in Prague, and the El Escorial Palace in Spain. Jacob has performed chamber music on the prized Amati instruments at the Smithsonian and appeared on stage with such diverse acts as the Kronos Quartet, Yo-Yo Ma, Suzanne Vega, Herbie Hancock, and Quincy Jones, among others. He has premiered new works by celebrated composers, including William Bolcom and Caroline Shaw. Jacob is a frequent performer with ensembles and orchestras around the country, appearing with A Far Cry (Boston), Camerata Pacifica, Manchester Summer Chamber Music, and the symphony orchestras of Birmingham (AL), Charleston, Huntsville, Mobile, New Haven, Santa Barbara, and Tuscaloosa, where he serves as principal viola.

A dedicated teacher, Jacob maintains a full studio of undergraduate and graduate violists at UA, and regularly does master classes and clinics at colleges and high schools across the country. He serves on the faculty of the Tennessee Valley Music Festival and has taught at the Brevard Music Center and Festival. Recent performances include solos with the Tuscaloosa Symphony and the University of Alabama’s Huxford Symphony Orchestra, recitals in Las Vegas, Greensboro (NC), New York, Havana, Prague, and Seattle, among others. Jacob is a regular presenter and performer at national conferences and international congresses. His album, “Czech Portraits,” was released in 2016 on the Centaur label, and he has written articles for the Journal for the American Viola Society and The Strad. Jacob co-commissioned a new viola and piano work from composer William Bolcom, Dark Dreams That Do Not Disappear, which was premiered at Merkin Hall in New York City on the occasion of the composer’s 80th birthday.

A native of Cincinnati, Ohio, Jacob is a graduate of Oberlin Conservatory, Yale School of Music, and University of California – Santa Barbara. His principal teachers include Helen Callus, Jesse Levine, Roger Chase, Roland Vamos, Masao Kawasaki, and Catharine Carroll Lees. In addition to his performance degrees, Jacob earned his M.A. in Musicology from the University of California – Santa Barbara. In his spare time, Jacob is likely to be found hiking, exercising, cooking, or bowling (high score: 289). He lives with his wife, Shannon McCue, and their two sons, Isaac and Jesse, in Tuscaloosa.