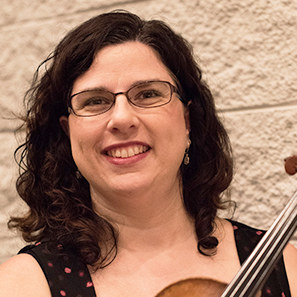 Violinist Jenny Grégoire is Associate Professor of Violin and String Area Coordinator at the University of Alabama. Born in Québec, Canada, Ms. Grégoire began to play violin when she was five. At age six, she was admitted in the pre-college division of the Québec Music Conservatoire where she studied with Jean Angers and Liliane Garnier-Le Sage and earned both undergraduate and graduate degrees in violin performance, with a minor in chamber music. Upon leaving Québec, Ms. Grégoire attended Northwestern University, where she received a Master’s degree in Violin Performance and Pedagogy with Dr. Myron Kartman. She was  a member of the Civic Orchestra of Chicago for two seasons and worked with conductors Daniel Barenboim, Neeme Jarvi, Mstislav Rostropovich, Pierre Boulez and Cliff Colnot, among others. Jenny Grégoire left Chicago to play one season with the New World Symphony, under the direction of Michael Tilson Thomas, in Miami, FL.

In addition to her orchestral career, Ms. Grégoire remains active as a soloist and recitalist. She has performed several times as a soloist with the Mobile Symphony and the Meridian Symphony Orchestra. In May 2019, she performed the Tchaikovsky Violin Concerto with the Tuscaloosa Symphony Orchestra and Maestro Adam Flatt. She has been heard in solo and chamber music recitals throughout the United States and Canada. An avid chamber musician, she has notably collaborated with violinists Stefan Jackiw and Nadja Salerno-Sonnenberg, as well as pianist William Wolfram. Additionally, Ms. Grégoire is on faculty at the Eastern Music Festival, where she is the Assistant Principal Second Violin in the faculty orchestra, under the direction of Maestro Gerard Schwarz. Ms. Grégoire recently performed Mozart Violin Concerto No. 4 with the Eastern Music Festival Chamber Orchestra.

In 2019, Jenny Grégoire traveled to Brazil with pianist Dr. Robert Holm, to perform recitals and teach masterclasses at the Conservatório de Tatuí and Unicamp University in Campinas. In January 2020, she was featured as a soloist with the Meridian Symphony Orchestra. More recently, Ms. Grégoire performed Vaughan Williams, The Lark Ascending, with the North Mississippi Symphony Orchestra and conductor Steven Byess. Ms. Grégoire plans to release this spring her first solo recording, “Music of My Homeland”, featuring music for violin and piano by French Canadian composers.