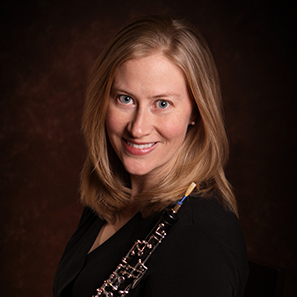 Internationally, Dr. Bailey has performed in London, Paris, Hong Kong, Tokyo, Singapore, Kuala Lumpur, Jakarta, and Turin. She has performed on multiple occasions as a featured performer at the Festival Internacional de Sopros in Rio de Janeiro. In 2015, she served as Second Oboe in the 24/04 World Orchestra in Yerevan, Armenia in commemoration of the centenary of the Armenian Genocide. Dr. Bailey is a frequent performer at conferences of the International Double Reed Society and has presented sessions on starting students on oboe at conferences of the Colorado Music Educators Association.

Dr. Bailey holds a Bachelor of Music in education and a performance certificate from the University of South Carolina, and both a Masters of Music and Doctor of Musical Arts in oboe from the University of Cincinnati College-Conservatory of Music. In addition to her degree studies, she spent a semester abroad at King’s College London. Formerly, she served as Assistant Professor of Oboe at Morehead State University and as Instructor of Oboe at Colorado Mesa University. Her principal teachers are Mark Ostoich, Rebecca Schalk Nagel, and Tess Miller.