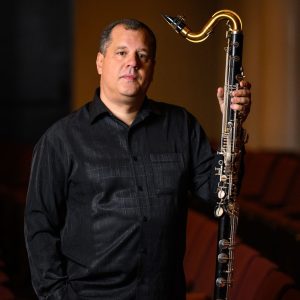 “Berio’s 13 Sequenzas, written over a period of four decades, are big solo works for different instruments. They famously make extraordinary demands on the performer, so much so that anyone mastering a Sequenza stands out as an undeniable master of his instrument. Molina is such a master, and his triumphant performance brought the entire house to its feet.” -Richard Rand, Tuscaloosa News

Dr. Osiris J. Molina is Professor of Clarinet and Woodwind Area Coordinator at the University of Alabama. A native of Elizabeth, New Jersey, he has extensive experience as a soloist, chamber, and orchestral musician. Dr. Molina is currently Principal Clarinet of the Tuscaloosa Symphony Orchestra, Acting Principal Clarinet with the Huntsville Symphony for the 2022-2023 season and has performed with the Alabama, Mobile, Mississippi, Meridian, and Chattanooga symphony clarinet sections, in addition to work with the Grand Rapids, Kalamazoo, Greater Lansing, and West Michigan symphony orchestras.

Dr. Molina’s chamber work includes his membership in the Vuorovesi Trio, a UA faculty trio consisting of the flute, oboe, and clarinet combination. Vuorovesi was accepted to perform at the IDRS, ICA, and NFA conferences in 2019, and will recording their first album of American music for this combination in 2021. In addition to Vuorovesi, he is also a member of the Cavell Trio, a reed trio dedicated to established and emerging works for this unique combination. Cavell has performed at multiple international conferences, including the 2011-2013 and the 2016 International Double Reed Society Conferences and the 2012-2016 International Clarinet Association ClarinetFest. Cavell’s third recording project, New Discoveries was released in 2017. In January 2023 Cavell will be performing on the Huntsville Chamber Music Guild Concert Series.

Dr. Molina is also a member of the Capstone Woodwind Quintet, the faculty quintet at the University of Alabama. They are committed to outreach efforts in the Alabama schools, evidenced by tours in the Tuscaloosa, Birmingham, Huntsville, and greater-Atlanta regions. In addition to his Alabama teaching duties, Dr. Molina will enter his tenth season as Clarinet Mentor at the Hot Springs Music Festival, Hot Springs, Arkansas in 2023.

Dr. Molina’s 2022-2023 season will celebrate the release of Cuba, Alabama, an album consisting of music for clarinet by Cuban composers Andres Alén, Javier Zalba, Paquito D’Rivera, Ernesto Lecuona, and Leo Brouwer on Blue Griffin Records, and in February 2023, Dr. Molina will be featured soloist on John Mackey’s new Clarinet Concerto Divine Mischief with the University of Alabama Wind Ensemble at the College Band Directors National Association National Conference at the University of Georgia.

Dr. Molina holds degrees from Michigan State University (DMA), Yale School of Music (MM), and Rutgers University (BM), where he studied with Dr. Elsa Ludewig-Verdehr, David Shifrin, Charles Neidich, Ayako Oshima and Dr. William Berz. Osiris has been active in music education at all levels. He teaches applied clarinet, chamber music and clarinet methods in the Music Education curriculum. Dr. Molina is an endorsing artist for Selmer Paris, Silverstein, Gonzalez, and D’Addario and performs on the Recital clarinet and the Privilege Bass Clarinet.