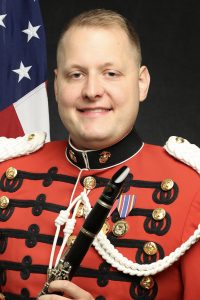 University of Alabama School of Music alum and clarinetist Staff Sgt. Harrison Burks performed in the inauguration yesterday in “The President’s Own” United States Marine Band. The band provided music for the swearing-in ceremony at the U.S. Capitol while seated directly beneath the inaugural platform. The band performed “Hail to the Chief” to honor President Biden, in addition to accompanying Lady Gaga on the national anthem.

Staff Sgt. Burks began his musical training on clarinet at age 9. After graduating in 2008 from Milton High School in Milton, Ga., he attended the University of Alabama in Tuscaloosa, where he earned a bachelor’s degree in clarinet performance in 2012 and studied with Osiris Molina. He continued his studies at Indiana University in Bloomington where he earned a master’s degree in clarinet performance in 2014, where he studied with Howard Klug. Other notable teachers include Ronald Aufmann, Ben Freimuth, and Ralph Skiano all of the Cincinnati Symphony Orchestra.

Prior to joining “The President’s Own,” Staff Sgt. Burks performed with the Evansville Philharmonic in Indiana.

Staff Sgt. Burks performs with the Marine Band and Marine Chamber Orchestra at the White House, in the Washington, D.C., metropolitan area, and across the country during the band’s annual concert tour.

The Marine Band is America’s oldest continuously active professional musical organization. Founded in 1798, the band has performed for every U.S. president since John Adams. Known as “The President’s Own” since the days of Thomas Jefferson, the Marine Band’s mission is to provide music for the President of the United States and the Commandant of the Marine Corps.